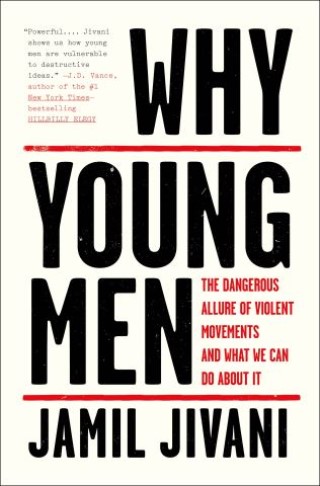 Across the world, we see an explosion of unpredictable violence committed by alienated young men.

Jamil Jivani recounts his experiences working as a youth activist throughout North America and the Middle East, drawing striking parallels between ISIS recruits, gangbangers, and Neo-Nazis in the West.

Having narrowly escaped a descent into crime and gang violence in his native Toronto, Jivani has devoted his life to helping other at-risk youths avoid this fate in cities across North America. After the Paris terrorist attacks of 2016, he traveled to Europe and the Middle East to assist Muslim community outreach groups focused on deterring ISIS recruitment.

Why Young Men is the story of Jivani’s education as an activist on the front lines of one of today’s most dangerous and intractable problems: the explosion of violence among angry young men throughout the world. Jivani relates his personal story and describes his entrance into the community outreach movement, his work with disenfranchised people of color in North America and at-risk youth in the Middle East and Africa, and his experiences with the white working class. The reader learns along with him as he profiles a diverse array of young men and interviews those who are trying to help them, drawing parallels between these groups, refuting the popular belief that they are radically different from each other, and offering concrete steps toward countering this global trend.

Jamil Jivani: Jamil Jivani grew up in a mostly immigrant community in Toronto, where he was nearly lost to feelings of hopelessness, anger, and hate, but he turned his life around with the support of role models and mentors. He went on to graduate from Yale Law School, teach at Osgoode Hall Law School, and dedicate his career to supporting youth facing challenges similar to those he experienced. His work has taken him from Belgium and Egypt, where he studied ways to help young men escape the influence of terrorist groups, to Ohio, where he partnered with JD Vance to help solve America's opioid crisis. Jivani's leadership has been recognized by many organizations, including the International Development and Relief Foundation, Yale University, and York University. At 31 years old, he survived a fight with stage IV cancer, which gave him greater insights into how people can overcome adversity. Why Young Men is his first book.